Which is Cooler? White Roofs vs. Green Roofs

We are all about Green Roofs here at Sow Green, but there are other methods to make the space above our heads more energy efficient. There are white roofs (also called “cool” roofs), and they are an inexpensive way to keep roofs cooler in the summer and reduce the heat island effect.

So what are white roofs? As the name implies, it is a roof that has a white or light colored surface. This white surface reflects the heat from the sun back into space, reducing the temperature surrounding the roof and inside the building below to a significant degree. So are white roofs a better alternative than green roofs? Turns out the verdict isn’t in just yet.

Although white roofs can reduce the heat build up in urban areas more effectively, they have the same impervious surface as a traditional roof. Therefore they do not help with retaining or filtering stormwater. They also do not last as long as a green roof, which can last up to twice as long as a traditional roof.  According to the Berkeley Lab study, a white roof has a better return on investment in regards to reduction in AC usage and energy costs, since a white roof can cost at a minimum $9 per square foot less to implement (1). But the study does not take into account less identifiable costs associated with stormwater pollution, creating a more biodiverse urban environment, CO2 absorption by vegetation, and the fact that green roofs last up to twice as long as white roofs.

The addition of solar panels to a green roof can also add additional benefits to the often underutilized space of a roof. Not only can solar panel produce energy for the building below, but they also provide additional shading and insulation to the rooftop surface. In fact a study conducted by the University of Kansas found that PV panels can perform better when installed on a green roof than a white roof (3).

It should be also be noted that often the reflectivity and heat absorption levels of a green roof often depend on the types of vegetation and the green roofs design. Many white roofs lose their reflective intensity after a few years of wear and tear, and the lack of heat absorption can actually keep building too cool when they need heat most: the winter (2). Table 1: Comparison of Benefits for White vs. Green Roofs

Even though white roofs can make a building cooler, a green roof can deliver many more benefits to building owners and the community at large. 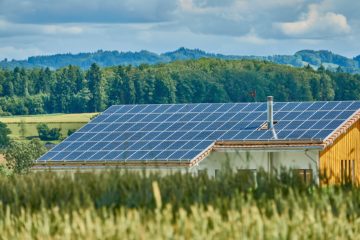 Here in sunny Colorado, solar energy can seem like a no-brainer. I mean all that free energy just coming down from the sky to some is too good to be true. But then you see Read more…